Getting to know him 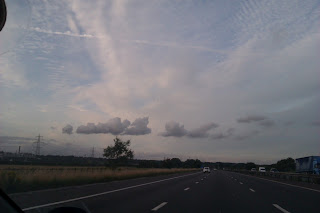 Bertie's personality is starting to show now.... no, really, bear with me here.  I wrote a while back about getting little signs from him, knowing the difference when it is him and when it isn't....well he is getting more adventurous with his signs...or I am getting better at spotting them.  He was always going to have a wooden train set.  All through my pregnancy we said, boy or girl, this baby is getting a wooden train set! I don't know why, it's the one thing we decided on and stuck with right from the start.  So after we lost him, we bought his wooden name train, which sits on the drawers in his bedroom.  His headstone has a beautiful carving of a little toy train...his coffin has toy trains all over it.  Trains are Bertie's thing. On friday night, driving down the M6 to visit him, right across the sky was a trail of clouds that looked just like his train.  I noticed it, and at just the same time, my husband did too, and he commented, "look-it's a Bertie train!" And it really was.  I had to take a picture.  I imagined him playing the driver, bossing about all the other angels, making them be passengers...I could picture his cheeky little face lit up with childish glee at getting to be the conductor and taking everyone's ticket.  He likes his trians. I am so pleased.

When we went to see him, the sun came out as always...but this time, this time he was really showing off....the sun fell across his bed only, the rest of the churchyard was under a cloudy sky.  A little sunlight fell on the two sleeping angels next to him, and their windmill was spinning round, had he brought them to see his mum and dad?....but his bed was bathed in glorious sunlight. That's my boy, the cheeky little show off.

I love getting these signs from him, but it makes me sad too, makes me miss him all the more, especially now that I am "getting to know him" in a sense.  I would hate to stop feeling him around me, but I just wish so much he were here. It isn't enough-here it is again, that word...happysad.

It's funny how I can write about this stuff, and people, lots of people will read it, enjoy reading it, think about it perhaps, think nothing of it perhaps...maybe leave a comment....But if I sat and told you, face to face, would you feel comfortable then? My experience so far suggests not. People don't know what to say. They look at their hands and shuffle in their seat.  Why is that? Is it because I can articulate it better as a blog post? Is it becuase reading it as text makes it somehow less real...like a work of fiction? If I sat and told you, would you believe me? Or would you think I am crazy? Maybe I am, but where's the harm? "If it makes her feel better, let her think what she wants". Good, glad that is sorted in your mind.

Maybe I am a little crazy.  I know a community of women who can relate to that.  In fact, I think that every woman who leaves hospital without her baby should leave instead with a standard issue straight jacket.  Yes, I did just say that, I am allowed. Black humour is allowed when you are the butt of the joke.

The Bertie train has been spotted in Edinburgh now.....we think they are off round the country to say hi to all the angel parents.....if you see them, blow a kiss, wave, smile....just think of them...and send him home to me in time for his birthday please.
Posted by AngelBertie at 19:27