He never fails to suprise me

This weekend has been very happysad. My brother in law got married on Saturday, it was a beautiful day and we all had a wonderful time. It's also a day I've been dreading for some time, dreading because I knew it was going to be a very hard day of missing Bertie, like all family/celebration days are.  I spent all day imagining him with me, in his little suit, running around on the dancefloor with all the other toddlers, photos with the bride, keeping him entertained through the speeches, saying goodnight early as he has to go to bed.....none of that happened, of course, becuase he was missing.

I coped admiriably, I think.  There were hard moments. The prayer in church that they would be blessed with children, twisted the knife as I remembered the same prayer at my own wedding.
The fact that it seemed we were the only couple there our age without children, and of course, just the fact that the whole family was there, and Bertie wasn't.  I managed. The mask was superglued on, and I did enjoy myself despite the pain in my heart.

The following day, we went to visit Bertie.  This was our last chance before his birthday next week, so we wanted to decorate his forever bed for his second special day. There had been a spare buttonhole left over from the wedding, so we took that to him too. As my husband wedged it in between the carriges of his train, the tears began.  He shouldn't be leaving a buttonhole at his son's forever bed, he should be pinning it to the jacket of his first tiny suit. It was such a bittrersweet moment, so wrong.  He was included, but not included as he should have been. And that was it, the floodgates were opened, the mask was off.  All the pain, all the hurt, all the missing him of the day before escaped from my eyes in a torrent.  Maybe it's the build up to his birthday again too, all at once that's a lot to deal with.

Then an amazing thing happened. A little robin appeared from behind Bertie's stone, and it hopped along right infront of us, as we sat there. It came so close to us, and jumped all on Bertie's flowers and stone. It stayed for ages. I felt he sent it to tell me, don't cry mum, I'm here. And that, of course, made me cry all the more. 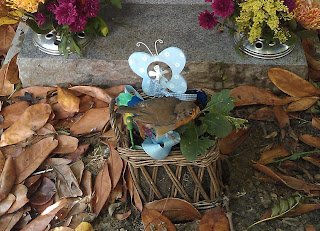 Such a precious boy.  I love you xx
Posted by AngelBertie at 10:53