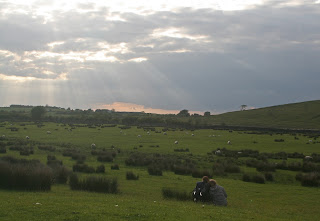 We spent the last week in the lake district for our holiday.  This year we didn't feel up to going abroad, it wouldn't have felt right.  If Robert were here, we wouldn't have gone abroad, and we felt like it would have been a really rubbish consolation prize and we wouldn't have enjoyed it.  So, cheap and cheerful it was! We had a nice time, a lovely escape, but it was happysad- it's just what we would have done if Robert were with us.  We sat in our lovely log cabin, imagining him crawling about on the floor, amazed at his first sighting of red squirrels, the cabin filled with the sounds of his gurgling.  But instead there was silence, one missing, as always.

We spent the jubilee at Hadrian's wall, they were lighting beacons there so we went along to have a look.  The sunset was just spectacular! We spent some time just walking and sitting and remembering Bertie.  It was so peaceful, nobody else there (the beacons weren't on til a couple of hours later) so it was lovely.  I did get that lovely peaceful feeling that he was with us, and I do feel so grateful that I have that, but at the same time so sad that this is the closest we can get to a family photo! I never wanted an angel, I wanted my son in my arms to stay.  It just isn't fair.
Posted by AngelBertie at 12:28