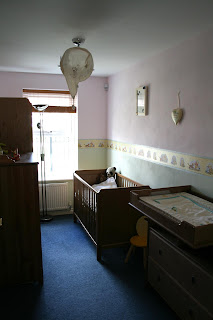 Over the past few months, I've read a few blogs/articles from women who say that they "make time to cry".  Until this weekend, I didn't understand it.  How can we make time to cry? The grief wave hits when it wants, hard, seemingly randomly- sometimes there's a trigger we can recognize, sometimes there isn't....but to decide when and where to let the grief win? How does that work?  Well, I found out, on Friday afternoon.

We decided last week, that maybe it was time to redecorate the nursery. You may remember I blogged about it a while back, and it has been through my mind several times since.  We got talking about how to increase interest on the flat (we are trying to sell) and decided that maybe we should repaint the nursery to a more neutral colour. Next thing, it was decided. We were doing it. Simple as that-practical-got to be done, no looking back. Decision made. And so followed a week of build up in my mind. How would I cope with doing this? Was I ready? The usual contradictions- it's only paint...but it is so much more than paint. It's the memories of painting it. It's HIS room. But, because it is his room....I am worried about bringing another baby home to it anyway...but there isn't another baby coming yet...but anyway, we want to sell and so it must be done...but that means going through all the drawers, all the stuff....all his stuff that is his but never was his. Round and round in circles.

I decided that in order to make it through this, I needed to finish it.  I needed his room to be just how it was meant to be...just for a while.  I needed to fix it in my mind, take some photos, and treasure the memories of choosing that scheme, making it happen, and the joy, the excitement, of planning our first nursery.  I needed to complete the photo diary we started almost two years ago.  So, the cover came off the cot. The crocheted blanket my mum's friend made came out, the baby changing mat, the light shade we never got to hang...the classic Pooh bear teddy we bought came out of his box for the first time.  I sat and held my boy's bed, imagining it was him. Rocking like a crazy lady, loving my invisible boy.  I talked to him, I wrote to him. I squared it with him. He's a big boy now, he's too big for whinnie the pooh and baby colours.  This doesn't mean we are forgetting him, but mummy needs to do this now.  I set aside my time to cry. I had my moment, and then it felt ok.

I felt peace, as I tore off the first piece of border, as I started to clear out the drawers.  As I looked at all the "stuff" that's been hidden from view for 19 months.  The stuff that I hoped by now would have been needed again.  The first punch in the gut came from an unexpected place....a lovely box of baby bath time products, and a six pack of wipes...both bought on sale, stocking up in advance, not long before he was born.  Kept all this time "for the next one"...checking the expiry to discover that it will be out of date before the "next one" comes along. Mocking my inability to conceive again.  Driving home just how long this room has been under dust sheets.  As if I could forget a single day.

After that I got angry, and that helped me keep going, pulling off more border...a mind numbingly tedious job, but my mind needed to by numb to do this. Just as I thought "I'd better keep a bit of this for his memory box", a little stretch, just enough to complete the pattern came off cleanly. Thanks sweetheart.  Mark came and joined me and we moved the furniture out.  I cleared out all my maternity clothes from the wardrobe (where they were heaped up and hidden from view through tears that first day we arrived back to the flat without him.)  The second gut-puch.  The maternity T-shirt I was wearing when we painted this room the first time.  A faded paint-smile I had painted over my tiny bump.  I didn't cry, I felt the lump rise, but I didn't cry. I remembered and I smiled at the memory.

I realised that for whatever reason I had kept all the correspondence to do with him.  From the hospital, from the funeral directors, from the stone masons...why? At the time I suppose I needed to keep everything that was anything to do with him.  It's all gone now. I don't need to read and re-read generic letters of condolence from the consultants. I don't need to recall the choices we had to make about lettering style for his stone, nor our choice of coffin...the train one of course, I don't need to see an invoice to remember that.

We finished clearing it all out, and began to paint.  That was surprisingly fine too...again, a mundane, practical task and I could detach from the emotion of what I was doing.  I managed to do something I can't normally do- I put it in a box in my mind and carried on with the job in hand.

Today we did the second coat, and put the furniture back. We have arranged it differently, it seemed right to do that. It's a different room now, same furniture, well that would always have been passed down....it's ready and waiting for a new baby. With traces of Bertie there too, his train, my faourite pooh bear quote "if there ever comes a day when we can't be together....keep me in your heart, I'll stay there forever" His memory box, his "Oglet" toy.

And now I am processing it all in my mind.  I am still torn. I am glad it is done, for many reasons. Either it will help the flat to sell, and if it does, I won't have any emotional attachment to that room, I won't have to leave his room behind.  Or, we will still be here with the next baby.  Well in that case, I won't have to do this task whilst pregnant, nor will I have to come to terms with bringing a different baby back to the room Bertie never came back to. It is different, and I needed it to be for a new baby.  But, there is no new baby, not yet. But, keeping it all the way it was, that had to change at some point didn't it? It is neutral now, doesn't look like a nursery except for the cot.  The changing table has been converted back to a regular set of drawers. The wardrobe is just a wardrobe unless you look inside it....That hurts, you know? That I don't need a nursery.  But I don't need a toddler's room either. We have no use for this room, it's a blank canvas waiting to be needed, waiting to be filled. Like my heart.