The Chronicles of Bed rest: Day 29

It was all go yesterday! I had my glucose tolerance test, so had to fast from midnight. It's a blood draw, then drink a drink that can only be described as Sprite post mix but someone forgot to add the carbonated water, then another blood draw. Student midwife sent to do the deed, actually she was very competent and I complemented her on her phlebotomy skills. However, when she came back after the two hours to do the second draw, it was a different story! She took the draw again, perfectly then went a bit white as she realised she has used the wrong colour bottle! I told her it was fine, go and get the right one and do it again. She came back with the correct bottle but no needle. She was getting a bit flustered now she then couldn't get the draw from a different vein and had to try a fourth time from my hand! Bless her. Four draws when two would have done, but at least the result was fine!

Irritation over night as the night midwife discovered I have been self administering some tablets I have been taking for years, I assumed they knew-it is written in my notes! Anyway, she woke me up at 4.30am to ask for the box, "so the doctor can prescribe them." Too groggy to argue the point that I had ample supply and please go away its 4.30am for goodness' sake, I handed them over. Next thing I know, she is creeping in at 6am to lock them in my room locker! Ugh! I questioned it, and apparently it is hospital policy to lock all patient drugs away, even paracetamol. I told her I found it mildly insulting and she just said they have to do it. So now it is more work for them and a nuisance for me as I have to request my tablet with every meal. Like a child. Remember me saying I felt like and extra in one flew over the cookoo's nest?  Well that feeling just increased ten fold!

Anyway, decided to cheer myself up by delving into the beautiful gift box my wonderful friend brought me this week. It's full of treats, encouragements, and jokes from growing up together, all individually wrapped with guidance on what to open when :) she is such a treasure! So, I opened a post card today with the following message: 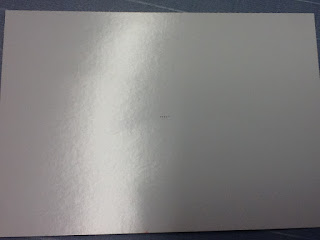 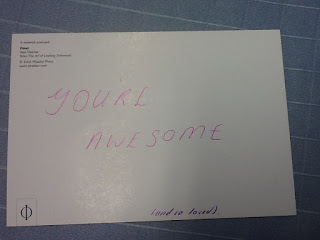 Made me smile and laugh :) just what I needed as a pick me up out of my pissed off-ness.

My consultant has been up to see me again. She wants to bring Grub's growth scan forwards and do it one day next week. It was originally planned for 1st July so two weeks yesterday. I'm glad about that as it means I can a. Leave my room a week sooner woohoo! And b. get an estimation of how big Grub is getting and if s/he is on track (notice I am avoiding using "they" as when I did that in previous posts people suddenly thought I was having twins!). She says she is chocka next week so will have to squeeze me in, but will endeavour to give me enough notice for Mr T to be able to attend from work. She is so lovely and accommodating.  She asked were the midwives monitoring the baby and I said no, as I haven't felt the need as I am getting plenty of movements. She said just to ask if I wanted it. For some reason I really don't! I have heard other women having it, it just means sitting for an hour listening to the baby's heartbeat sound like a train going by endlessly. Haha, I prefer to just enjoy the kicks and rolls! Then she said, oh so casually, "it looks set to be a nice day today, maybe you could, go and sit outside for a bit?"

What? Already?  The thought actually made me panic a bit. I'm only 28+3. (Two weeks bigger than Bertie, go Grub...!) but I would still rather not tempt fate quite yet. She said if I was just sitting it would be fine, and I will go stir crazy in here. True, but I would rather wait and share that moment with Mr T I think. And go down in a wheelchair. Not sure I can remember how to climb stairs! I hope I'm not getting agoraphobic......

I don't think so. Truth is I am pretty desperate to go out, I just want to do it when I feel safe enough and in a way that feels safe.  Mr T will be here with me Wednesday afternoon, when I will be 29 weeks. That seems like a good day to venture out. Will have to hope for sunshine!