This was never meant to be a daily update! How can I have more to talk about when stuck in a hospital bed than I normally do at home??

Bad night's sleep.  I am in the last room on the ward, and behind my wall is the next ward. I think it must be a geriatric ward as for the second time I've been kept awake by someone older continually shouting for a nurse :/ this time I heard her go in and tell him off for shouting, but it didn't work. I must have dropped off at some point, as I had a horrible dream I was losing the baby. Bleeding. To be honest I am suprised I have got this far since my only other one at about 8 weeks or so! Still it was horrible and not an experience I want to repeat, consciously or subconsciously. Grub must have known as s/he woke me up with such forceful kicking and tumbling as if to say "oi! Mum! We'll have less of that, I'm right here". I remember Bertie doing the same thing after a similar dream with him. Anyway then I was wide awake again enjoying being beaten up from the inside for a while but eventually had to have a word and try to get baby to settle. I did need more sleep! "This is really cute and everything Grub, but for the love of God go back to sleep so I can too, ok?" I needed daddy, he always settles Grub down.

Speaking of daddy, he has not had the best start to the day. Three door mice on our hallway floor this morning. Three. Now The Cat is a bit of an opportunist hunter really. She doesn't bring regular gifts but occasional ones, when she feels like it.  Since I have been in (six days) that makes five mice. Not good. After the first two I thought ok, she knows somethings up, wonders where I am and is out of routine. She'll settle down. After three more I am now worried that she is actually pining for me! Ok lay it on thick Pips, as if I don't feel bad enough already! Any suggestions on how to calm a cat that misses her human? Apparently Mr T just ain't got the cat play skills.... I am thinking drugs. Catnip and feliway. Maybe this card from a friend was pre-emptitive! 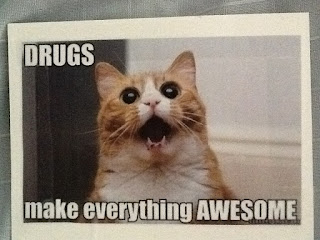 Otherwise, still doing OK! The domestics like me becuase I am polite and nice to them. The midwives like me becuase I never need anything.  I am an outpatient inpatient, largely self sufficient, other than needing to have my meals brought.  My day has become very structured, I know when to expect ward round, midwife visit, domestic to do my bins, domestic to do my floors, domestic to offer to change me bedding, lunch, dinner, 5pm stomach injection.....Aah, although midwife Amy  fooled me yesterday on that. I was expecting her and listening out for the drugs trolley rolling down the corridor. She came in holding the syringe without bringing the trolley so I was suprised! Sneaky!
A little irritating is the playground bell they like to use to announce meals are in the dining room, and again when they want visitors to leave. What makes it more irritating is that neither apply to me anyway! Oh flip. I really am becoming institutionalised aren't I?
Posted by AngelBertie at 08:04